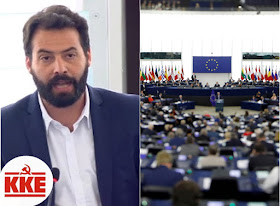 “After the unacceptable decision of the Constitutional Court of Ukraine on July 16 imposing a ban on the CP of Ukraine, the Administrative Court of Kiev on August 19, utilizing the entire anti-communist legal arsenal of the Ukrainian governments, also proceeded to ban "Workers’ Newspaper", the newspaper of the CP of Ukraine.


These decisions are a further escalation of anti-communism. They prohibit political activity by the Communists, violating the right to freely propagate their ideas. They prove how hypocritical the "human rights and freedoms" and "freedom of the press" declarations are, which the EU systematically usesagainst governments that are not likeable to itanywhere in the world, when its interests are at stake.

In the case of Ukraine, as well as Poland and the Baltic states, EU-backed governments are promoting such provocative anti-communist decisions, on the basis of the monstrous equation of communism with the monster of fascism. At the same time, Ukraine, its governments and business groups enjoy a series of agreements with the EU, such as the so-called EU-Ukraine Association Agreement,at the expense of the Ukrainian people.

Based on all the above, which stance does the European Commission take on these bans against the CP of Ukraine, its newspaper and on the acts to ban the propagation of communist ideas?".