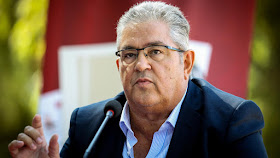 As he said, the KKE had said that such a development should be “compined against organizations such as NATO and the EU which act through “divide and rule”, by intervening, changing borders and separating people, something that we saw in 1999 with the dissolutioon of Yugoslavia where the big problem of the neighboring republic emerged”.


The Communist Party General Secretary added that the KKE has the same stance today, being in favor of solidarity, friendship and common activity with the people and the workers of the neighboring country, without irredentisms and nationalisms on either side, without the unhistorical claims about “Alexander the Great” and “Macedonian language and identity” and “of course against NATO”.

Dimitris Koutsoumbas stressed that the essence of the Prespes Agreement is the integration of FYROM in NATO, as it is “explicitly identified in its second article” and underlined that the KKE will not vote – under any circumstance- in favor of such an agreement which “puts the neighboring country in the wolve-pack alliance of NATO and which does not guarantee peace, friendship and good cooperation in the upcoming period”.

The General Secretary pointed out that the KKE's internationalism “is identified with patriotism” and more specifically that “it is identified with the defense of the homeland of the workers, not of the ruling class which has economic interests and wages wars for the benefit of her profits”. D. Koutsoumbas also said that the stance of the KKE goes hand by hand with the struggle of the working people in FYROM “against NATO membership and against the repression exercised by their bourgeoisie”. He added that those who will have political and economic benefits will be the large monopolies, Mrs. Merkel “who came here for the German capital's business and in order to support Mr. Tsipras” and Mr. Trump, as well as sections of the bourgeois class.

Regarding elections (either extaordinary national elections or the local-EU elections of May), Koutsoumbas said that the KKE is ready for the electoral battles and stressed the need for the strengthening of the Communist Party which is the only that can make a real difference in favor of the people's interests today. He pointed out that the stronger the KKE is the best for the interest of the Greek people, not only for the prevention of the anti-people measures but also for the opening of another way of development.