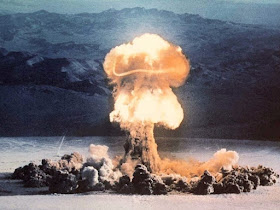 The World Federation of Trade Unions (WFTU), since the first years of its foundation, has had a clear and plain position against nuclear weapons. During all of its Congresses, decisions asking for the abolition of all nuclear weapons and of all countries have been voted.
Today, we are not only worried about USA’s withdrawal from Iran nuclear agreement but also about yesterday’s Trump unilateral refusal which canceled the scheduled meeting with DPR Korea’s leadership.
This position of the USA and their allies generates new dangers for the wider region and mankind as a whole. The USA, NATO and European Union aim at plundering Third World Countries’ natural resources, strengthening their spheres of influence and tracing new borders. The dangers for the World Peace are grave. The inter-imperialist antagonisms are constantly being exacerbated.
The class-oriented trade union movement has to react and to demand:

The WFTU denies USA’s “right” to decide on who can and who is not allowed to have nuclear energy. No one has ever authorized USA to allow Israel, Pakistan, Turkey or S. Korea to have nuclear weapons while telling others lies and excuses.
The solution is our suggestion:
ABOLITION OF ALL NUCLEAR WEAPONS EVERYWHERE
This is for the benefit of the World Working Class and the necessity for World Peace.
The Secretariat.
Share
‹
›
Home
View web version