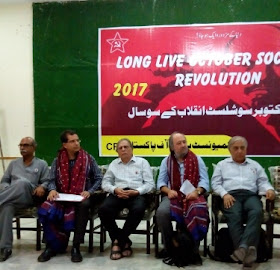 In particular, the KKE delegation took part in an international conference on "the 100 Years of the Russian Revolution: 1917-2017", held at the Shaheed Zulfiqar Ali Bhutto Institute of Science and Technology in Karachi on October 17th.

There, in a room packed with students and workers, a large number of university professors, historians and writers, they shed light on a variety topics concerning the October Revolution.
In his speech, Giorgos Marinos, member of the P.B. of the C.C of the Communist Party of Greece, gave a warm greeting to the organizer of the event, “TAREEKH FOUNDATION TRUST” and the participants, and he particularly talked about the international importance of the October Socialist Revolution, about its conquests,  the achievements of the Soviet Union and among others he mentioned the following:

“Undeniably a new epoch in history has emerged, the epoch of transition from capitalism to socialism. The October Socialist Revolution demonstrated this. The bourgeoisie has taken the position of the feudalists who were overthrown by the bourgeois revolutions. Today, even in countries with a subordinate position in the imperialist system, the maintenance of some "pre-capitalist vestiges", as they are sometimes called, does not change the trend for the monopolies to expand and penetrate every sector of the economy.

Monopoly capitalism permeates the economic relations all over the world and is the complete material preparation for socialism. Consequently, in our times, the character of the revolution cannot be determined on the basis of the criteria of another historical era which has ended.

The relative backwardness in the development of the productive forces in a country, compared to more advanced capitalist countries, is an objective development and does not negate the fact that, to a certain extent, the material preconditions for the construction of the new socialist society have been created.

Workers' power, the socialization of the means of production and central planning, the movement towards the construction of socialism will resolve problems of backwardness. It will accelerate the development of the productive forces, will consolidate and ensure people's sovereignty and will break the relations of dependence on imperialist centers and unions, forming new conditions in the international relations, with the people's interest as the sole criterion.

The discussion about the character of the revolution is of major importance. Its determination on the basis of present-day conditions is a matter of life and death and a precondition for the communist movement to overcome its crisis, to escape from the illusions created by the so-called "transitional stages" and to meet the complex demands of the class struggle.

The Socialist character of the revolution is determined by the objective necessity of resolving the basic contradiction between capital and labour.”
On Wednesday the 18th of October the KKE delegation, accompanied by members of the Communist Party of Pakistan (CPP), visited the city of Hyderabad on the southern part of the country. There they held a substantial discussion with members of the Progressive Writers Association and participated in an activity of the Communist Party of Pakistan to honor the October Socialist Revolution.

Workers and poor farmers of the region massively welcomed the KKE delegation with enthusiasm, highlighting the strong internationalist bonds between the two Communist parties. In a full theater and in a climate of particular combative spirit, the General Secretary of the CC of the Communist Party of Pakistan, Imdad Qazi, the University professors Mubarak Ali and Saeed Ahmed as well as Giorgos Marinos took the floor. G.Marinos in his speech, among others, mentioned:

“We are happy to meet here with our comrades and we address warm militant greetings to the Communist Party of Pakistan, to the militants who are struggling for the rights of the working class, the people of Pakistan, who are experiencing the sharpening problems of the capitalist system of exploitation and the anti-people policies of its governments.

We know the difficult conditions in which our comrades are struggling, we follow the attacks of the forces of reaction, obscurantism that are a product of the rotten system and serve its needs for the repression of the labour-people's movement.

We say to our comrades: comrades we greatly appreciate your struggle and we assure you that we are at your side and will fulfill our internationalist duty in a firm  and consistent way.

The violence of bourgeois power confirms the analysis of the communists about the dictatorship of the monopolies and underscores that the struggle for democratic, social rights is directly linked with  the struggle for socialism.
This conclusion also emerges from the experience of the KKE which has faced, over its 100- year history, illegality for many decades, dictatorships, imprisonment and exile, torture and executions, the murders of thousands of communists.

It played the leading role in the resistance of the people against the fascist occupation during World War II; it conducted an armed struggle in the period 1946-1949 against the bourgeois class and the imperialist intervention of Britain and the USA.

The KKE stood upright, strong through many storms, with strong links with the working class and continues to play a leading role in the workers'-people's struggles in Greece, to actively work for the coordination of the struggle of communists all over the globe.

So that the ideas of Marxism-Leninism prevail and so that opportunism is defeated, for the regroupment of the communist movement on a revolutionary basis and for it to acquire a unified revolutionary strategy, equal to the principles that led to the victory of October.

Our party and dozens of other communist parties were founded  and developed due to the powerful influence of the Great October Socialist Revolution. The existence and strengthening of the Soviet Union, the establishment and activity of the Communist International and the reinforcement of the international struggle of the communist movement assisted the peoples in a number of countries to throw off the yoke of colonialism.

This leap in social development provided and provides the strength to communists to fight against the difficulties and to militantly intervene in the most difficult moments of the class struggle, confronting  capitalist barbarity, the bourgeois state and its multi-faceted  mechanisms.

The October Socialist Revolution has been vindicated historically, it has demonstrated its incredible endurance and is alive, in spite of its opponents, the bourgeoisie and the opportunists, who are the agents  of bourgeois ideology and politics inside the labour movement.

Its shining  messages express the interests of the direct producers of all  wealth, the prospect of the struggle of the working class and oppressed popular strata at an international level. It is  for this reason that they have been a source of inspiration for a century and will continue to guide  our political-ideological struggle, so that the peoples become  liberated from the shackles of exploitation, social injustice, for the socialist-communist future.”

On Thursday, October 19th, the KKE delegation took part in an activity at the Doctors Association in Karachi against the imperialist wars and transferred the experience of the Communists’ struggle in Greece.