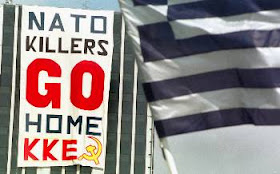 The people know that the USA and their allies, which created criminal organisations like "Al Qaeda" and the "Islamic State", highlight and utilize pretenses in order to justify the interventions and the imperialist wars in Syria, Iraq, in the broader region of the Middle East and Northern Africa, which consists field of fierce antagonisms, with the people being the victims. They did the same in the past too.


The developments prove the dangerous policy of the SYRIZA-ANEL government, which involves the country deeper in the imperialist plans, providing among others the military base of Souda and other military bases and infrastructure for military actions of the USA, NATO and the EU in the region.

The KKE demands the immediate closure of the Souda (base) and the other military bases. Greece must be disengaged from the imperialist plans and wars."