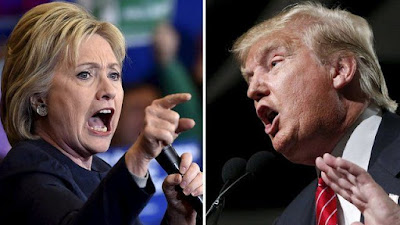 Today, 8th November, the people of the United States of America are voting for the new President of the country. Their choice is between Hillary Clinton and Donald Trump, two people who express different parts of the american bourgeoisie. Their political and economic proposals reflect the intensification of the contradictions between different portions of the U.S. capital, within the metropolis of capitalism. Like every candidate in  the U.S. Presidential Elections, both Mrs. Clinton and Mr.Trump are representatives of monopoly interests and large corporations.

Whatever the outcome of today's elections is, the working people of the United States must have no illusions about the upcoming developments. The future president- either Clinton or Trump- will not hesitate to proceed decisively in order to safeguard the interests of the U.S. monopolies.


The voters in the United States have to choose between Scylla and Charybdis; between two choices which do not represent the interests of the working masses but the interests of the U.S. monopoly capital. Whatever the outcome of the elections, the american people must have no illusions that their lives will improve.

The only real hope for the working people in the United States- as well as everywhere else in the world- lies in the organized struggle against the real opponent; the exploitative capitalist system. The people must concentrate their power in organizing their counter-attack, towards a different way of developments, against the monopolies and their authority. The real solution to the huge problems of the U.S. working class won't come from any Trump or Clinton, but from the struggle of an organized labour movement towards the transformation of society.

Capitalism is a rotten system; it can offer nothing but misery, crises, unemployment and wars. The only hope for the people is not in the ballot box, but in the daily struggle for a society without capitalists and monopolies. For a socialist society with the people in the power. It is in the hands of the people, of the working masses in the United States of America to overthrow this miserable situation.