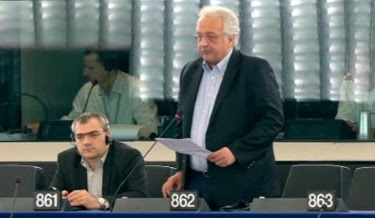 The complications - due to conflicts within the EU – concerning the ratification of the «Comprehensive Economic and Trade Agreement (CETA)» between the EU and Canada which was scheduled for the 27/10/2016 does not mean that the peoples can rest easy. These conflicts have nothing to do with people's interests. They express instead violent contradictions among various monopolies, on the basis of their own interests and plans.


The 'interpretative declarations' annexed to the agreement at the last moment in order to defuse popular opposition do not change its anti-people character. They aim to disguise it with the use of verbalism, while they are not binding. CETA is much more than a trade agreement that sets standards for products and services. It is a powerful tool for the removal of all barriers to the penetration and activity of big monopolies in capitalist markets on both sides of the Atlantic. It constitutes evidence of the aggression of the capital and the barbarism of the capitalist system. It is an instrument for salary reductions, for attacks on labour rights, for the increase of the rate of unemployment. Its results will be painful for the self-employed, for the small tradesmen, for the farmers of the poor and middle strata. It delivers social services that are funded by the state to business groups; it even gives them private courts to impose their commercialization without any interference in the name of the ‘protection of the investors’. CETA also paves the way for the conclusion by the EU of other anti-people agreements, such as the Transatlantic Trade Agreement (TTIP) with the US and TISA, the multilateral agreement on services.
It comes as no surprise that the Greek government was in favour of CETA, being consistent with its overall anti-people political line, which steadily serves the interests and the profitability of the monopolies. On 18/10/2016, following the Informal meeting of Ministers regarding signing CETA, the Minister of Economy, Development and Tourism, George Stathakis, stated that ‘the positions that prevailed were the ones that the Greek delegation supported from the very first moment’ and that from now on ‘the framework for safeguarding EU acquis is shaped and these safeguards will take into account the concerns of the society of the citizens’.
The SYRIZA-ANEL coalition government tries to hide this position by employing various tricks once again, as the SYRIZA MEPs appear to denounce CETA in statements and articles, while on 21/10/2016 in the EU Summit the Greek government had proudly put its signature on the agreement. One day later, on 22/10/2016, Minister Stathakis wrote in the Greek newspaper ‘Efimerida ton Syntakton’ in favour of the agreement; ‘it is an agreement with strong regulatory rules; it is really important that the configuration took into account the concerns of the society of the citizens and their institutions’. After all, the government through its signature at European Council has taken a stance also in favour of the completion of the TTIP. This is SYRIZA. It does the dirty work in order to serve the interests of the monopolies and at the same time tries to deceive people that it is supposedly against this very same dirty work.
Working people must turn their backs on the government’s deception and tricks. They need to reject all the calls for a supposedly ‘better’ or ‘transparent’ agreement. They need to demand the cancellation and withdrawal of CETA, TTIP and all the other reactionary agreements by strengthening their struggle against the anti-people policies of the government, the EU and the capital and by targeting the real opponent; the monopolies, their associations and their exploitative system.