Fidel Castro- La historia me absolverá (History will absolve me) 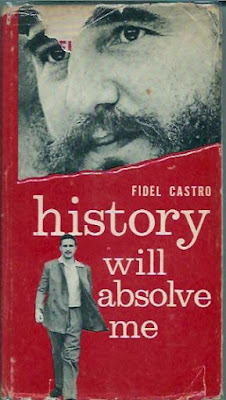 Honoring the 26th of July and the 63rd anniversary of the Moncada Barracks attack, we publish the full defense speech of Fidel Castro in court against the charges brought against him after the Moncada attack. The speech was given on 16 October 1953.

Never has a lawyer had to practice his profession under such difficult conditions; never has such a number of overwhelming irregularities been committed against an accused man. In this case, counsel and defendant are one and the same. As attorney he has not even been able to take a look at the indictment. As accused, for the past seventy-six days he has been locked away in solitary confinement, held totally and absolutely incommunicado, in violation of every human and legal right.
He who speaks to you hates vanity with all his being, nor are his temperament or frame of mind inclined towards courtroom poses or sensationalism of any kind. If I have had to assume my own defense before this Court it is for two reasons. First: because I have been denied legal aid almost entirely, and second: only one who has been so deeply wounded, who has seen his country so forsaken and its justice trampled so, can speak at a moment like this with words that spring from the blood of his heart and the truth of his very gut.