25th Anti-Imperialist Camp of KNE in Florina: Honoring the legacy of the Democratic Army 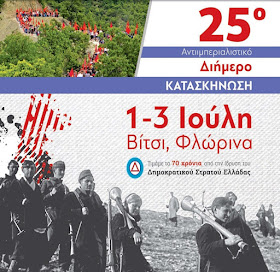 Thousands of young communists are expected to participate in the 25th Anti-Imperialist Camp organised by KNE (Communist Youth of Greece) between 1-3 July 2016. The camp takes place in Pisoderi, Florina in northern Greece and includes numerous activities, such as political and music events, walk-climbing in the mountain, visits in mountainous strongholds of the Democratic Army of Greece, etc.

This year's Anti-Imperialist camp honors the 70 years of the Democratic Army of Greece (DSE), the peoples' army which fought against the national forces and the imperialists during the country's Civil War (1946-1949). On Saturday morning, the participants will have the opportunity to visit the town where the Provisional Democratic Government (Communist Mountain Government) was based in 1947.

The camp will conclude on Sunday 3 July with a political event in the Memorial for the Battle of Florina. Speech will be delivered by the Secretary of KNE Nikos Abatielos.

Below you can see a video made by KNE, featuring the area of the camp.