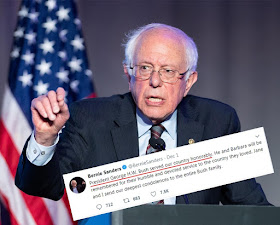 Senator Bernie Sanders- the much publicized supposed "socialist" of the Democratic Party- did it again! In a message published on his personal Twitter account, he praised the recently deceased former U.S. President George H.W. Bush as a man who "served our country honorably", pointing out that he will be remembered for his "humble and devoted service to the country".

What, we are compelled to ask, is Bernie Sanders, who present himself as a political figure of the left and even socialist, talking about? Did he forget about the crimes that George H.W. Bush committed during his presidential term? Doesn't he know about the imperialist wars in Iraq and Panama? Does Bernie Sanders know how many people were massacred as a result of Bush's decision to invade Iraq in the Gulf War?


When exactly did George Bush "served his country honorably"? Maybe when he was playing a major role in CIA's support and funding to far-right groups in Latin America (e.g. Contras in Nicaragua), or when he was leading the anti-communist campaign against the Soviet Union and the socialist countries in 1980s...

The legacy of George H.W.Bush is the legacy of an imperialist murderer; a man whose decisions led to the deaths of thousands of people.

But, apparently, a pseudo-socialist like Sanders have no hesitation to praise such criminals. After all, he did the same in the case of John McCain, when he publicly praised the late warmonger Senator as "an American hero"(!) and a "man of decency and honor"! What kind of decency and honor is included in bombing Vietnamese people or in advocating barbaric, imperialist wars in Iraq, Syria, Iran and elsewhere? 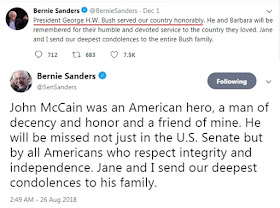 Like Sanders, the new celebrity of the Democratic Party, Representative-elect for New York's 14th congressional district Alexandria Ocasio-Cortez had also praised McCain by writing: "John McCain’s legacy represents an unparalleled example of human decency and American service. As an intern, I learned a lot about the power of humanity in government through his deep friendship with Sen. Kennedy. He meant so much, to so many. My prayers are with his family". What a shameful whitewash of an imperialist warmonger...

The praise for criminals like Bush and McCain by "leftists" such as Sanders and Ocasio-Cortez reveals everything about the true political character of social democracy in the United States. Despite the effort by some mainstream media to present them as "socialists" and "anti-establishment" figures, the truth is that politicians like Sanders and Ocasio-Cortez are entirely in line with the exploitative capitalist system and the reactionary bourgeois political agenda.

They do not reserve even the slightest trust from the working class.